Citing study, Building Changes calls on communities to reconsider their use of VI-SPDAT standardized assessment tool.

Building Changes is calling on communities across the country to reconsider use of the VI-SPDAT, a widely used Coordinated Entry standardized assessment tool that helps determine who gets prioritized for housing referrals. A new study, funded by Building Changes, finds that use of the VI-SPDAT unfairly favors white people over people of color, thereby perpetuating racial inequities within the homeless system.

Building Changes believes strongly that communities have an obligation to address inequities that negatively impact the efforts of people of color to transition successfully out of homelessness and into stable housing, including any barriers that restrict their access to services. 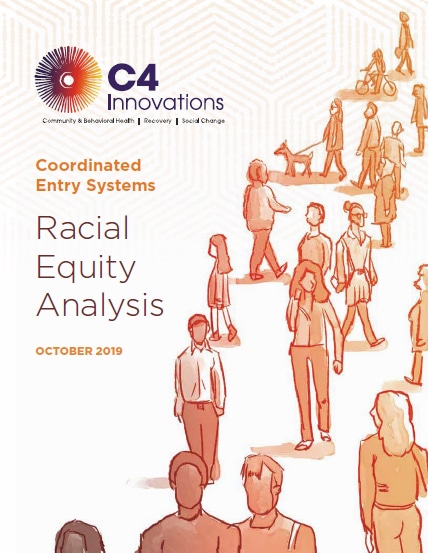 The C4 Innovations study, released today, asserts that people of color—both single adults and families—experience system-level inequities from a tool specifically designed to objectively capture who among those experiencing homelessness have the highest levels of vulnerability. Under U.S. Department of Housing & Urban Development rules, those assessed to be most vulnerable are given priority for receiving housing resources from the homeless system. Housing for people experiencing homelessness is scarce, and the resource therefore must be doled out equitably, free of any influence of racial bias.

Building Changes enlisted Massachusetts-based C4 Innovations (formerly the Center for Social Innovation) for its expertise in developing research-based solutions that advance housing stability for people who are marginalized. Building Changes and C4 share the same commitment to eliminate racial disparities and achieve equitable outcomes in the homeless system.

The VI-SPDAT consists of a series of uniform questions around 16 different indicators of vulnerability. Persons being assessed receive an overall “vulnerability score” based on their answers to the questions, and those with the highest scores are prioritized for referrals to housing programs, such as Permanent Supportive Housing or Rapid Re-Housing.

C4 concludes that the VI-SPDAT tool is not equitably capturing vulnerabilities across racial groups, with people of color receiving overall lower prioritization scores than their white counterparts. This holds true for both single adults and families, although the pattern is stronger and more consistent among individuals.

Both C4 and Building Changes recognize that individual communities implement the VI-SPDAT differently—such as who is asking the assessment questions and the environment in which they are asked. We therefore acknowledge that those variable processes factor into VI-SPDAT assessment outcomes that show racial inequities.

“The VI-SPDAT was created with the best of intentions to standardize the process for prioritizing people for homeless programs,” said D’Artagnan Caliman, executive director of Building Changes. “The C4 study shows, however, that efforts to apply objectivity are not always failsafe.

Communities need to dive deep into their Coordinated Entry assessment tools and processes and eliminate all racial inequities that exist.
—D’Artagnan Caliman

“Race is an underlying factor in determining who the homeless system refers to a housing program—and who doesn’t get those referrals. That’s simply unfair. Communities need to dive deep into their Coordinated Entry assessment tools and processes and eliminate all racial inequities that exist.”

Building Changes funded the C4 study after learning from local homeless systems that whites were receiving a disproportionate share of referrals to housing programs.

In compiling the study, C4 analyzed Coordinated Entry assessment data from four communities: King County (Seattle) and Pierce County (Tacoma) in Washington state, Multnomah County (Portland) in Oregon, and the Blue Ridge area (Roanoke) of Virginia. The data analyses were conducted separately for single adults and families. Many communities around the country use the VI-SPDAT or have created their own assessment tool based on it. Responding to the anecdotal evidence that housing resources were being allocated disproportionately to favor whites, some communities already have begun experimenting with alternatives to the VI-SDPAT to counter the racial inequities. In the state of Washington, both Pierce and King counties have demonstrated forward-thinking leadership, taking the initiative to adjust their Coordinated Entry assessment tools and processes.

Pierce County created its own unique assessment tool several years ago, with technical assistance from Focus Strategies. The county also conducted its own data analysis, verifying the existence of racial disparities in vulnerability scores between whites and people of color. The county used those findings to refine the way the tool is implemented and continues to refine implementation practices to bring fairness to the process and ensure that people of color have an equitable chance as whites to be referred to housing programs offered through the homeless system.

At the beginning of 2018, King County began to identify racial inequities from its use of the VI-SPDAT and commenced a community-led planning process to develop an alternative. The county continues to analyze its prioritization process and currently is seeking funding to develop an entirely new assessment tool that would be rooted firmly in racial equity. Building Changes is encouraged by King County’s commitment to improve its prioritization tool and create an equitable process for all people experiencing homelessness to access housing services.

We call on other communities across Washington state—and the entire country—to follow the leads of Pierce and King counties by examining their assessment tools and practices to ensure that people of color experiencing homelessness are being prioritized equitably for housing programs. If communities step up, our original vision for an objective and failsafe Coordinated Entry process can yet be realized.

(Updated 10.30.19 to reflect the involvement of Focus Strategies with the Pierce County work.)