Refugees from Somalia, Osman Mohamed and his family arrived in King County seeking a better life and future but found themselves struggling to stay housed.

Refugees of the ongoing civil war in Somalia, Osman Mohamed’s family boarded a series of flights terminating at Seattle-Tacoma International Airport and began a new life in unfamiliar surroundings.

King County. The name brought to mind promise and possibility. The family’s initial housing, however, was far from regal. “We came looking for a good life, a good future, but when we arrived, it was a very difficult situation,” Mohamed said.

The refugee resettlement agency that sponsored the family found the Mohameds a place to live in Kent as a condition of arrival. But in a tight rental housing market in which private landlords call the shots, the family of eight got placed in an undersized two-bedroom apartment. The Mohameds were grateful, but cramped.

Federal refugee resettlement benefits covered the rent—but only for the first three months. Soon after the resettlement assistance ran out, so did the family’s capacity to pay rent. The landlord delivered a three-day notice to vacate. At the time, the family’s rent exceeded its monthly income, which was $700 in TANF (Temporary Assistance for Needy Families) benefits through the state.

Every family we see has different needs and different skills. One program does not fit everyone. We liked how Building Changes gave us flexibility and more time to work with our families.
—Asma Abdulrahman, Muslim Housing Services case manager

“When I heard, ‘I have to kick you out,’ I said to myself, ‘I must change my situation and do something,’” Mohamed said. A neighbor referred Mohamed to Muslim Housing Services in Seattle. Through a homeless prevention pilot developed by Building Changes and All Home, Muslim Housing Services kicked into gear, persuading the landlord to hold off on eviction while rushing to provide the family flexible financial assistance it needed to stay housed. The agency also connected Mohamed to employment services, and he and his oldest son both found jobs within two months.

Mohamed continues to work for an aircraft fueling company at the airport where his family’s American adventure first touched down. Making ends meet is still a struggle, but he said his family feels settled after moving to a larger apartment in Federal Way. “We are grounded now,” Mohamed said. The extra space is nice because the family has grown by one. Mohamed recently became a grandfather, his eldest daughter giving birth to the first family member born in America.

Our state welcomes about 3,800 refugees to resettle here per year. Most of the families are placed in King County, where support systems for recent immigrant communities are well established—but where affordable housing is scarce. Refugee families face a series of unique challenges in achieving housing stability. Federal refugee resettlement assistance covers the costs of initial housing but the funds run out after about three months. Many families at that time are still settling in and therefore unable to pay rent on their own. Building Changes and All Home recently tested a pilot in King County to address the resource gaps and system barriers that increase the risks of refugee families becoming homeless. It also laid groundwork for improved collaboration among some of the agencies and systems that serve refugees. Our pilot demonstrates that tailored services and flexible financial assistance can help refugee families and prevent homelessness.

To learn more about the pilot, see: Preventing Homelessness for Refugee Families: A Unique Population Calls for Unique Solutions 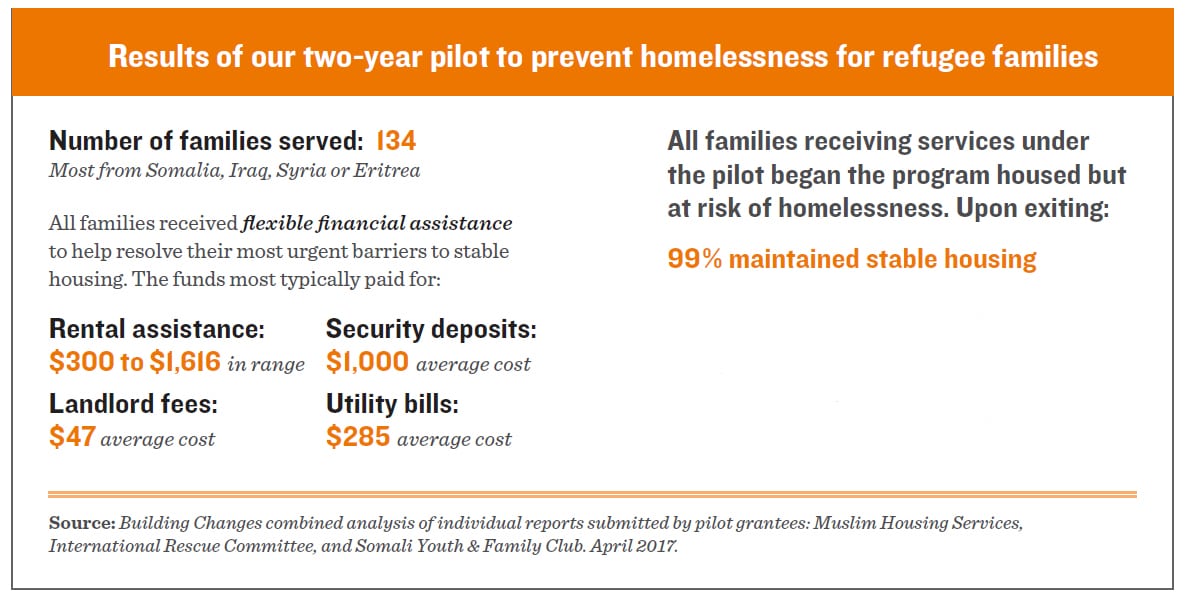